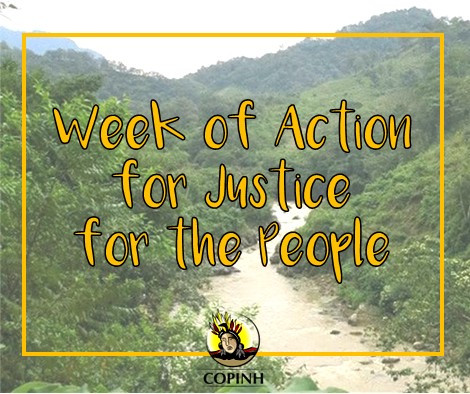 COPINH and the community of Río Blanco have been illegally excluded from the “Fraud on the Gualcarque” case against 16 public officials. Berta Cáceres and COPINH denounced the illegal granting of concessions and licenses to install the Agua Zarca Hydroelectric Project (PHAZ) on the sacred Gualcarque River, which is linked to the murder of our compañera in 2016.

We call on national and international organizations to be part of this Week of Action for Justice for the Peoples.

That the right of indigenous communities to denounce the violation of their rights and the access of the people to justice be respected.

To achieve that the Court admits COPINH as a victim in the case and that the process does not continue until the community of Rio Blanco, represented by COPINH, is part of it.

How can you join the campaign?

This Monday, October 12, Day of Indigenous Resistance, join the tweet for justice for the people

You can use some of these messages:

Sign the letter demanding that the right of communities to be part of the justice process be respected:

We invite you to follow our social media and COPINH channels and demand together with us Justice for the people!

“They have believed that impunity is eternal, they are wrong, the people know how to do justice” – Berta Cáceres.