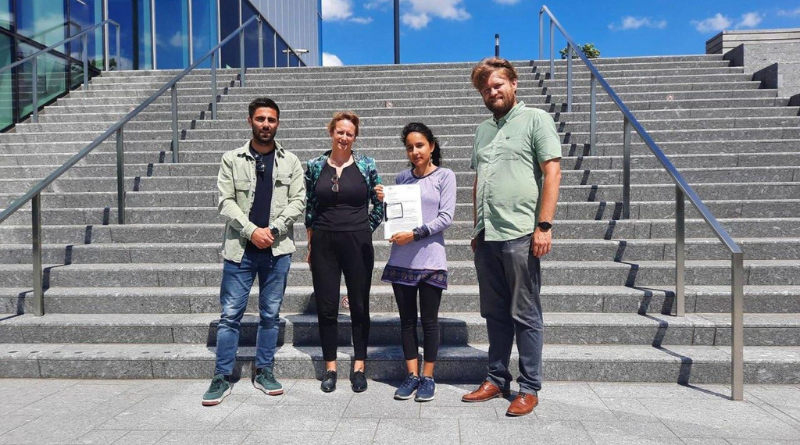 Today, June 28, 2022, 13 years after the 2009 coup d’état, COPINH, together with the daughters and son of Berta Cáceres, filed a criminal complaint with the Dutch Attorney General’s office against the Dutch bank, FMO, and its directors for the crimes of complicity in acts of corruption, embezzlement, money laundering and violence in their financing of the Agua Zarca Project of the Atala Zablah family.

This legal action aims to unmask the criminal actions of the supposed “development” and “green” banks such as FMO, which with their money finance corruption, violence and the violation of human rights of indigenous communities by multimillionaire bankers such as the Atalas.

The criminal accusation is against the legal entity of the bank FMO (Nederlandse Financierings-Maatschappij voor Ontwikkelingslanden N.V.) 51% owned by the Dutch State and against its main executives; Nanno Kleiterp, honorary president of the European Development Finance Institutions (EDFI); Jurgen Rigterink, current first vice president of the European Bank for Reconstruction and Development (EBRD); and Linda Broekhuizen, former interim executive director of the FMO, among other executives.

This action is in addition to the civil lawsuit action that COPINH filed in May 2018 against FMO for its negligent action in the handling of its financing to the Agua Zarca project that led to violence against the Lenca community of Rio Blanco and COPINH, resulting in the murder of community members and Berta Cáceres.

The Dutch law firm Global Justice Association, which represents COPINH in the civil complaint, together with international experts concluded that the FMO committed criminal offenses of complicity in the actions of the Atala Zablah family, following the analysis of 676 pages and 151 annexes of new information contained in the response to the civil complaint filed by the law firm De Brauw Blackstone Westbroek N.V., on behalf of the FMO in May 2019.

The criminal complaint filed today is based on the following elements:

The Dutch prosecutor’s office should analyze these elements presented in the 138-page complaint document and act against the persons linked to these crimes.

COPINH reiterates that there is not and there will not be development as long as the basic rights of Indigenous Peoples are violated and the richest oligarchs responsible for the economic, political, environmental and social crisis that our countries are experiencing are financed.

Given in the cities of La Esperanza, Intibucá, Honduras and Amsterdam, The Netherlands, on the 28th day of the month of June 2022.

“With the ancestral strength of Berta, Lempira, Mota, Iselaca and Etempica we raise our voices full of life, justice, freedom, dignity and peace!”