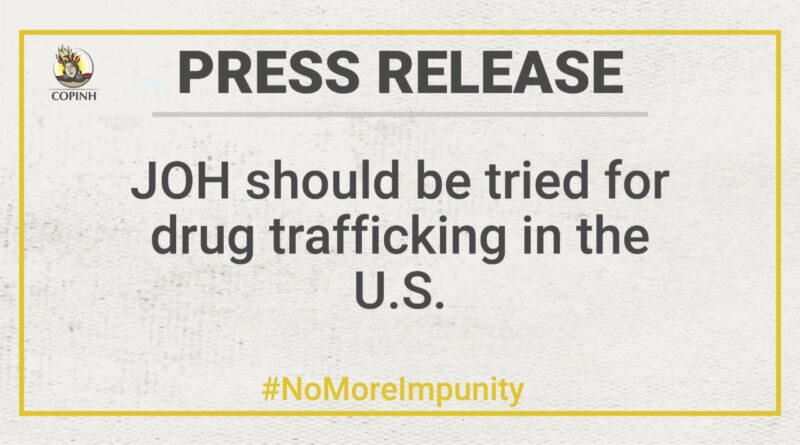 This Wednesday, March 16, the hearing for the extradition of former President Juan Orlando Hernandez will be held in the Supreme Court of Justice for being considered linked to three crimes related to drug trafficking: conspiring to import, manufacture and distribute a controlled substance (drugs); using or carrying firearms in support of the conspiracy to import narcotics and conspiring to use or carry firearms in support of the narcotics conspiracy.

His extradition is an expression of Honduras’ dysfunctional justice system that lacks the independence to have charged, investigated and convicted him in Honduras. This despite having been a sustained demand of the people and the accusations of drug traffickers who have already been extradited.

It is reiterated that in Honduras there is a justice system that responds to economic and political interests, raging against the impoverished people and keeping the country’s big criminals unpunished.

This is the only opportunity for him to be symbolically tried for the crimes for which he continues to go unpunished. At tomorrow’s hearing the evidence will be presented and the judge will decide to grant or deny JOH’s extradition.

As an organization, and as part of the affected people, we demand that he be extradited and that no maneuvers be used to impede his trial since the Honduran justice system has proven its lack of independence and will.

We regret that the U.S. knew of this information and that it allowed for so long the illicit actions of JOH and that in a calculated and belated manner it is asking for his extradition. All of his actions operated under the full knowledge and complicity of the US, its convenient silence to counteract them is a source of impunity that operates according to geopolitical interests and to the detriment of the rights of the Honduran people.

As an organization we are alert to mobilize in the face of any adverse decision of the Supreme Court in the way of the extradition of the biggest criminal, former official, who has known the history of our country. We do not forget that our colleague Berta Cáceres was assassinated under his government, which maintains important links with the criminal structure Atala Zablah.

Finally, we alert the people of Honduras that JOH is only the visible face of a group of criminals who are unpunished and who have instrumentalized the State to develop nefarious actions of persecution, violence, selective assassinations and robbery and who represent a danger to the population and to the process of justice for Honduras.

Given in La Esperanza, Intibucá on the 15th day of the month of March 2022.

“With the ancestral strength of Berta, Lempira, Mota, Iselaca and Etempica rise our voices full of life, freedom, dignity and peace!”