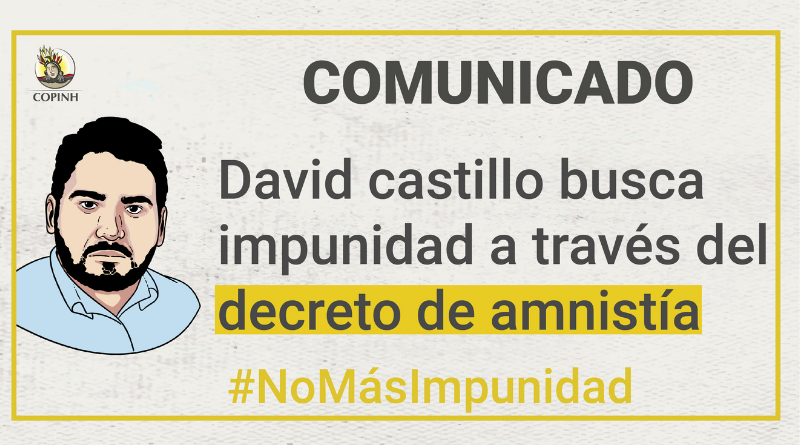 Roberto David Castillo Mejía, convicted as “co-perpetrator” of the murder of Berta Cáceres, seeks to benefit from Amnesty Decree 04-2022, in order to suspend the process against him for corruption in the case of Fraud on the Gualcarque.

Lawyers Ritza Antunez and Juan Sánchez Cantillano filed a request, on March 8, before the Corruption Sentencing Court, to file the proceedings against him for the case of corruption in the licensing of the Agua Zarca project on the Gualcarque River, in which he is accused of the crimes of use of false documents and fraud.

The Sentencing Court has convened a hearing for Wednesday, March 16 at 9 am for the discussion of this request. The time and day coincide with the extradition hearing of Juan Orlando Hernández and the ruling in the case against former first lady Rosa Bonilla.

In light of this, COPINH states that:

1. We denounce and reject the illegal and illegitimate use of the Amnesty Decree for political prisoners and prisoners of conscience, victims of persecution due to the 2009 coup d’état. The amnesty should not be a source of impunity but an act of justice for the victims criminalized for their belligerence in the struggle after the coup d’état.

2. David Castillo does not fall under the precepts of the Amnesty decree since the acts of corruption crimes he is accused of were carried out after June 28, 2009, were not proper to his functions as an employee of ENEE, nor for actions against the coup d’état. On the contrary, it is fully established that David Castillo was a beneficiary of the Coup d’Etat by obtaining concessions and permits, and not a victim.

3. David Castillo committed, at least, the crimes of use of false documents and fraud for the granting of licenses and contracts for the Agua Zarca project for his own benefit and that of the criminal structure Atala Zablah, for which he should be tried and sentenced.

4. The Corruption Sentencing Court, presided by Fernando Gabriel Morazán, and the institutions involved must reject outright the request for impunity of David Castillo through Amnesty Decree 04-2022.

5. The pretension of David Castillo and his legal defense to submit to amnesty is the confession of his criminal responsibility for corruption and of his impossibility to dismiss the charges.

6. We call on the national and international community to speak out and act against the impunity maneuvers of the criminal structure Atala Zablah.

Justice for Berta, No More Impunity in Honduras!

Given in the city of La Esperanza, Intibucá, on the 14th day of the month of March 2022.

“With the ancestral strength of Berta, Lempira, Mota, Iselaca and Etempica rise our voices full of life, freedom, dignity and peace!”