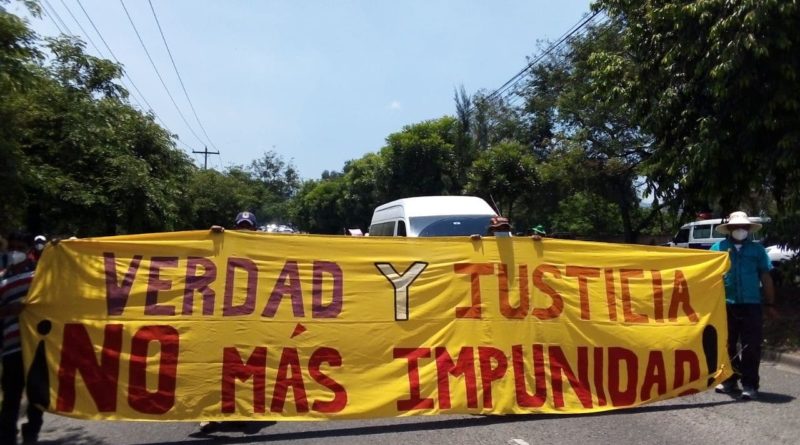 In the context of the trial against Roberto David Castillo Mejía, operative hand of the interests of the Atala Zablah oligarchs, who is co-author of the vile murder of sister Berta Cáceres, COPINH, together with the Indigenous peoples of Honduras mobilize today to denounce the model of dispossession and looting that is imposed on communities rich in common goods of nature and who fight for this to be reversed.

We recall that Indigenous, Black and Peasant-led organizations in Honduras have spent years denouncing the mechanisms used to implement concessioning of our territories that include the privatization of rivers, land, subsoil, forests, beaches and others that coup governments have urged for the economic profit of small groups of businesses.

These projects are implemented in a violent manner, ignoring the right to Free, Prior and Informed Consultation of the peoples. In our country, violence on the part of companies building hydroelectric and mining projects, the Special Economic Development Zones (ZEDE), together with other projects that this fraudulent and illegitimate government continues to promote, stand out.

With the search for justice for Berta Cáceres, we have reaffirmed that the peoples have always been right not to give our permission to this logic of dispossession. The “Agua Zarca” hydroelectric project alone has clearly shown that these projects are highly corrupt, in which influences are trafficked to ensure implementation. In addition, they are encouraged by criminal groups that only care about profits, refusing not only to respect fundamental rights, but also to comply with the requirements imposed by their own sold-out institutionality.

The State of Honduras, apart from being an active participant in the dispossession, giving all the facilities to the oligarchs with their front companies, has lent itself to criminalize the people who defend their rivers, mountains, beaches, forests and all the territories. It also ignores the rights of the peoples to be formally given their place as victims when they are aggravated.

We the peoples uphold our demands expressed days immediately after March 2, 2016, when sister Berta Cáceres was sown in the resistance of our territories:

5 years after the sowing of the unforgettable comrade Berta.