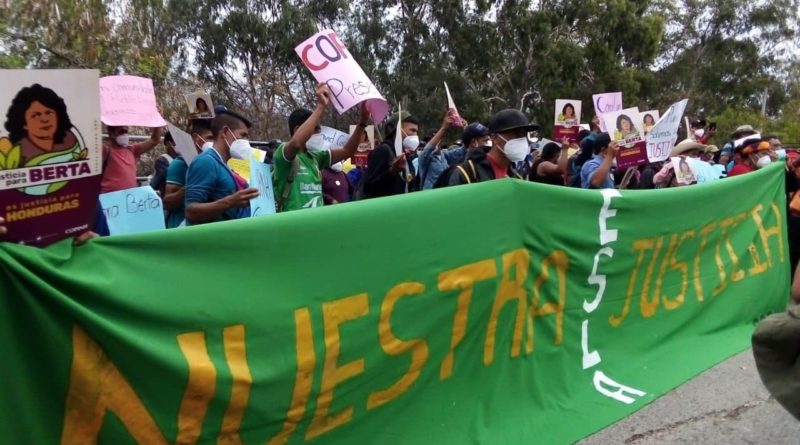 After overcoming innumerable obstacles presented by the legal defense of the accused David Castillo, the oral and public trial hearings began. However, due to a new recusal to the court by the legal defense, the fourth at this stage, the hearings were suspended until this appeal is resolved by the Court of Appeals.

Nevertheless, the short start of the trial against David Castillo allowed the presentation of new evidence by the legal team representing the family of Berta Cáceres and COPINH linking the Atala family to payments made to David Castillo days before the crime in the framework of conversations to provide “logistics” to the assassination structure.

Daniel Atala Midence, Financial Manager of DESA, made a payment to PEMSA S.A – a company managed by David Castillo in Panama – in the amount of 1 million 254 thousand dollars. This money was transferred 2 days before the crime, in the framework of conversations for the delivery of money from David Castillo to Douglas Bustillo, a military officer convicted for coordinating the assassination operation.

This would be one of the evidence that connects the intellectual authorship with the assassination group already convicted in 2018, which demonstrates the way in which companies are instrumentalized in Honduras to carry out illicit and criminal actions.

The lack of investigation by the Honduran Public Ministry on the financial movements of those involved and investigated is demonstrated by this initiative of the victims to present new evidence, even more so when the intermediary bank, Banco BAC, is presided over by one of the alleged masterminds of the crime, Jacobo Atala Zablah.

While Daniel Atala carried out a transaction directing more than one million dollars to a company controlled by David Castillo, the telephone records show communications in which David Castillo made an economic commitment, an alleged loan to Douglas Bustillo, hours before he coordinated the operation to assassinate Berta Cáceres.

“There is irrefutable and convincing evidence not only for the conviction of Castillo, but evidence that opens links to other responsibilities that today enjoy impunity,” said Berta Zúniga outside the Supreme Court of Justice in a press conference.

The victims are the fundamental basis of this case, they must be heard.

Once the trial began, the Court denied the presence of Laura Zúniga as a direct victim and part of this process to the hearing, and with the exclusion of international observers and Human Rights organizations that had requested to enter the courtroom, as had been allowed in other occasions with the pertinent sanitary measures.  The victims have the right to be part of the processes that seek to clarify the truth in order to guarantee justice in these cases, therefore they have a priority role in an oral and public trial, they are not peripheral.

Faced with this situation that continues to exclude people from access to justice, Laura Zúniga sent a letter to the Court demanding respect and guarantee of her rights as a victim. This generated reactions from human rights organizations and international authorities calling for a transparent trial with all the guarantees for the victims of this crime.

In this country and in many Latin American countries, there is a pattern of violence and corruption that kills those who claim their rights and natural resources. The murder of Berta Cáceres has its origin in the acts of corruption that approved the operation and concession of the Agua Zarca Project, owned by the Atala Zablah family.

These acts of corruption uncovered and denounced by Berta Cáceres and COPINH reflect the criminal practice of the owners of private companies that persists today in a series of energy generation and mining projects that are imposed in the country, an example of these is the case of the community of Guapinol against the mining company Los Pinares/ecotek of Lenir Pérez.

Despite the violations of their rights, the lives that have been taken by corruption, by the State and the criminal motivations of the company of the Atala Zablah family, of which the community of Rio Blanco has been victim, COPINH has so far been excluded as a private accusation to be part of the case Fraud on the Gualcarque. It is still awaiting the resolution of an amparo for the Supreme Court to decide on the matter. There is a clear pattern of corruption that was focused on neutralizing the struggle in defense of the Gualcarque River, which today continues to prevail and impose its criminal structures on the territories.