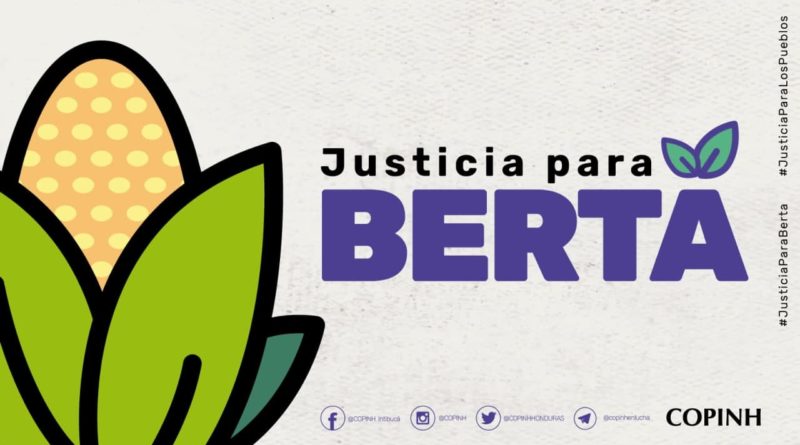 The memory of our comrade Berta Cáceres, the irreverent woman, fighter and conscious, has convoked us once again to remember her life and struggle, to denounce once again that impunity hovers over our people every time there is no punishment for those who commit horrendous crimes such as the one she was the victim of.

The Honduran justice system turns a deaf ear to the existence of numerous information gathered and in-depth investigations by international experts that have identified the masterminds of the crime and that remain in the judicial files.

It has been 1827 days, 1827 dawns in which the light of justice and truth have escaped Honduran society because the judicial system prevents justice for the crime of Berta Cáceres.

Pressures from economic and political groups are preventing justice from advancing and Daniel Atala Midence, José Eduardo Atala Zablah, Pedro Atala Zablah and Jacobo Atala Zablah from being brought to justice to answer for their crimes.

New information on this case has revealed that behind the crime are irregular movements of money of foreign origin and that the motivation for the murder are the corrupt acts of the hydroelectric project owned by the Atala family.

There should be no more contemplation for those who, behind the shield of money, continue to murder the people of Honduras. Every day that passes without punishment for these criminals, Honduras sinks into the dark hole of impunity.

The Lenca people, the Honduran people and the international community know who are responsible for this crime that has mourned so many lives. The justice system must respond to this truth.

The clamor of mother earth and the commons, increasingly plundered, supports us in this search for justice, that is why we will not falter with the rebellious Lenca people.

For the above, the Civic Council of Popular and Indigenous Organizations of Honduras, COPINH, together with the family of Berta Cáceres and the legal team we declare ourselves as follows:

“With the ancestral strength of Berta, Lempira, Mota, Iselaca and Etempica, we rise our voices full of life, justice, freedom, dignity and peace “.