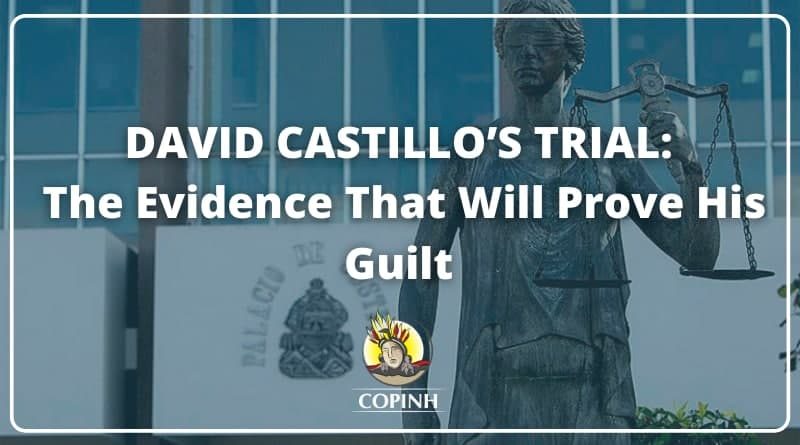 The Court has called for a hearing on Tuesday, November 17th, to begin the first stage of oral arguments to present the evidence against  David Castillo, an employee of the Atala family and one of the masterminds of the crime against Berta Cáceres.

At the hearing for the examination of proceedings, held on October 22nd, the court denied the most recent appeals filed by the defense and recognized that these appeals are delay tactics used by the defense lawyers Sanchez Cantillano and Ritza Antúnez.

In addition, the court appointed backup counsel for David Castillo in case his defense team attempts to further delay the process with their absence.

There was no public broadcast of this hearing unlike the previous sessions; a practice that the judiciary had implemented due to COVID-19 health restrictions.

All of this happened without the necessary public access and transparency, thereby denying the right of participation in the process to the crime’s victims. The Honduran people must be able to follow the process in a high impact case and that requires respecting the right to transparency, truth and justice for Berta Cáceres. We are hopeful that the next hearings will comply with these requirements by broadcasting the process on the judiciary’s Facebook page to be re-transmitted through COPINH’s social media.

There is strong evidence proving Castillo’s guilt that cannot be disparaged in this process. This is a crucial moment for the Berta Cáceres case and an opportunity for Honduras to show that no one should be above justice, not even if you are a businessman or member of the military.

The country is now facing a crisis aggravated not only by COVID-19 but also by the arrival of Hurricane Eta to Honduran territory, increasing the conditions of  vulnerability, especially on the northern coast of the country.

This is the region in which strong struggles have been forged in defense of territory, such as that waged by OFRANEH and by the community of Guapinol to protect water and life.

The consequences of the hurricane are made worse by the destructive model imposed on us by the economic and corrupt elites of the country who do not respect the common good and are enriching themselves at the expense of Mother Earth. It is against this extractive economic model of plunder and death that Berta Cáceres fought.

The people in resistance are still being harmed by the socio-economic model in Honduras that is against both nature and human rights. Solidarity among the people will continue to strengthen despite this crisis, which is why Berta Cáceres’ legacy continues to call for the care and defense of Mother Earth.

56 months after Berta was planted, her struggle is still alive.

On November 2nd, marking another month since Berta Cáceres was planted, people around the world from national and international organizations participated in the global action called by COPINH in solidarity with the struggle for justice for Berta.

In addition, under the slogan “We love Berta So Much”, feminist women from Honduras and from different parts of the world created a virtual gathering they called the “Classroom for Berta” where they shared not only experiences of struggle, but also experiences of her daily life that reveal her political and pedagogical essence that permeated and continues to fill the spaces where Berta walked.

With music, poetry, anecdotes, laughter and emotion, the political voices of her friends and comrades gave expression to the legacy of Berta Cáceres and reminded us that despite adversity it is worth continuing to fight for the people, the rivers and the territory of Honduras.