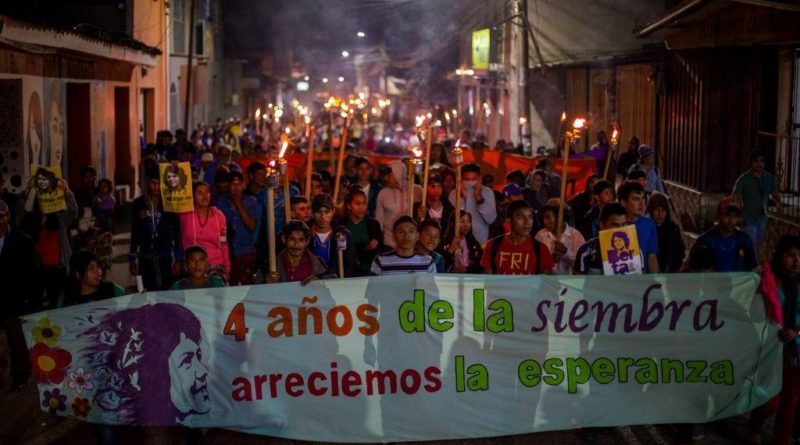 On Thursday, October 22, one of the preparatory hearings for the trial against David Castillo Mejía for his responsibility in the crime against Berta Cáceres was held. This hearing was not broadcast publicly and a resolution is pending on three appeals for annulment filed by the defense.

This hearing has been suspended on two occasions due to the actions of Castillo’s defense. The preliminary hearing was delayed for over a year and four months and there have been seven suspensions during the trial stage. This time the defense has filed appeals in an untimely fashion in order to delay the process in an act of impunity.

Even though the Judicial Branch is obliged to guarantee the publicity and transparency of the process, this hearing was not broadcast either, limiting the participation of the victims. Not only Berta’s family and COPINH should be part of this process, but the entire Honduran community.

COPINH and the Lenca community of Río Blanco have been excluded from the Gualcarque Fraud case, a process against 16 public officials accused of committing corruption crimes to illegally impose the Agua Zarca Project.

The legal team representing COPINH filed a writ on Wednesday, October 14, to confirm a constitutional injunction in favor of the communities affected by the Agua Zarca Project. This project is mired in crimes from its very origin. Officials from the ENEE, SERNA, and local mayor’s offices acted in a fraudulent manner in favor of the DESA company, owned by the Atala Zablah family.

The Lenca community of Río Blanco also presented a petition to the Supreme Court of Justice on October 15, demanding respect for the community’s right to be part of the Gualcarque Fraud case. Dunia Sánchez, a member of the Río Blanco community declared: “As the community of Río Blanco and as COPINH we must be part of this process, there was illegal documentation to grant a concession on the Gualcarque River, we want transparency and participation in this case, we know that they have been following the trial without our presence as victims.

COPINH in its last communiqué states: “We call on the international community to use its political weight and urge the State of Honduras to respect the fundamental rights of the indigenous communities, guaranteed by international standards.

The continuation of the oral trial without the direct participation of the victims is a flagrant violation of the right of access to justice.

Sakharov Prize Finalists! Recognition of those who defend life.

The defenders of the Guapinol River, criminalized for opposing the project of the mining company Inversiones Los Pinares/Ecotek in their territory, Berta Cáceres and COPINH, were nominated for the Sakharov prize. The European Parliament awards the Sakharov Prize every year in recognition of the work of individuals or groups who defend human rights and fundamental freedoms.

In the midst of this nomination, one of the defenders of the Guapinol River, Arnold Joaquín Morazán Erazo, was shot dead in his home on Tuesday night, October 13. He was one of 32 people criminalized by the mining company Inversiones Los Pinares and the Public Ministry of Tocoa.

In response to this, the families of the defenders of Guapinol and COPINH communicated: “This nomination is an important call for attention from the international community that recognizes the work in defense of Mother Earth. It is a call for the State of Honduras to cease threats, attacks, and persecution against people who defend their rights and those of the planet and it is a call against banks and extractive companies to stop their deadly investments.