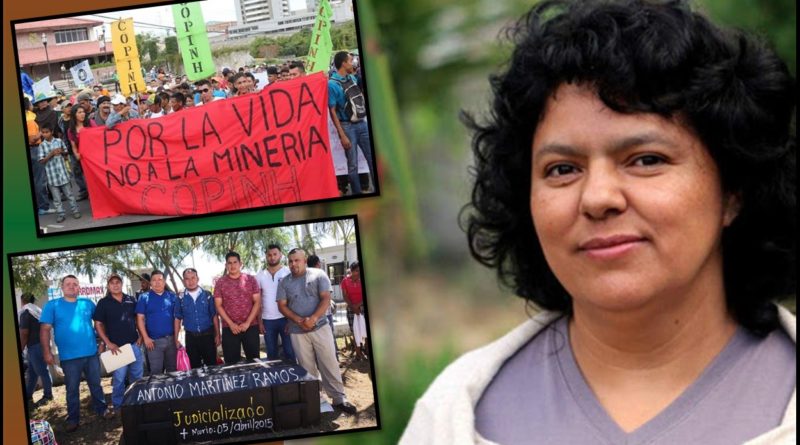 Joint statement from the family of Berta Cáceres, the Civic Council of Popular and Indigenous Organizations of Honduras (COPINH), the Municipal Committee for the Defense of the Common and Public Goods of Tocoa and the families of the illegally incarcerated Guapinol Water Defenders following the announcement of the shortlist nomination for the Sakharov Prize.

On Monday, October 12, Berta Cáceres and eight illegally imprisoned defenders of the Guapinol River in Honduras were honored together by the European Union Parliament and selected as one of three finalists for the 2020 Sakharov Prize for Freedom of Thought. The award honours individuals and groups of people who have dedicated their lives to the defense of human rights.

With this nomination as finalists, the European Parliament recognizes the legitimate and necessary global struggle for Indigenous sovereignty, the defense of water and territory and takes a necessary step to save our planet, rivers and all life that sustains Mother Earth. The parliamentarians understand the devastating role of extractive capitalism that destroys lives to serve an economic model that is killing our planet and those who defend it.

Honduras is one of the most dangerous places in the world to protect rivers, territory and to defend the environment. The struggle for autonomy and self-determination gives rise to constant and brutal attacks on Indigenous and Garifuna Peoples who exercise our rights. The social fabric of rural communities we rise up to protect the commons is destroyed through violence, corruption and criminalization. We, the Peoples, are excluded from decision-making when it directly affects us, but we bear most of the deadly consequences.

Four and a half years after her murder, the intellectual authors of the ruthless crime against Berta Cáceres not only remain in impunity, but their bloody extractive projects remain intact and it is Berta’s family and her organization that are the target of smear campaigns for demanding comprehensive justice. Meanwhile, the organization she founded, the Civic Council of Popular and Indigenous Organizations of Honduras (COPINH), is systematically excluded from participating in the judicial processes that affect it. In addition, the Lenca communities that rise up to protect themselves from the extractive projects of death are constantly threatened.

Guapinol and the communities of Tocoa are caught between powerful drug cartels and extractive capitalism, and the vigilante groups and politicians who participate in and benefit from both. Instead of fulfilling its obligations to protect vulnerable communities, the Honduran state is perpetuating violence through militarization, surveillance and false charges that serve to protect the interests of extractive companies. The highest courts are proving to be an important part of this repressive alliance. There are currently 8 defenders in arbitrary and unjustified pretrial detention and 5 more defenders facing clear political persecution.

The assassination of Arnold Joaquín Morazán this Tuesday is evidence of the systematic violence, terror and threats faced by Indigenous Peoples and organized communities that fight against extractive companies to protect water and the environment in Honduras; part of a perverse pattern that is repeated around the world when Peoples rise up to stop an economic model based on plunder, and also demonstrates the impunity in which the extractive model operates in Honduras.

This nomination is an important call for attention from the international community to recognize the work in defense of Mother Earth. It is a call for the State of Honduras to stop the threats, attacks and persecution against people who defend their rights and those of the planet and for the banks and extractive companies to stop their deadly investments.

“We must shake our conscience free of the rapacious capitalism, racism, and patriarchy that will only assure our own self destruction. The Gualcarque River has called upon us, as have other gravely threatened rivers. We must answer their call. Our Mother Earth—militarized, fenced-in, poisoned, a place where basic rights are systematically violated—demands that we take action”  -Berta Cáceres, 2015