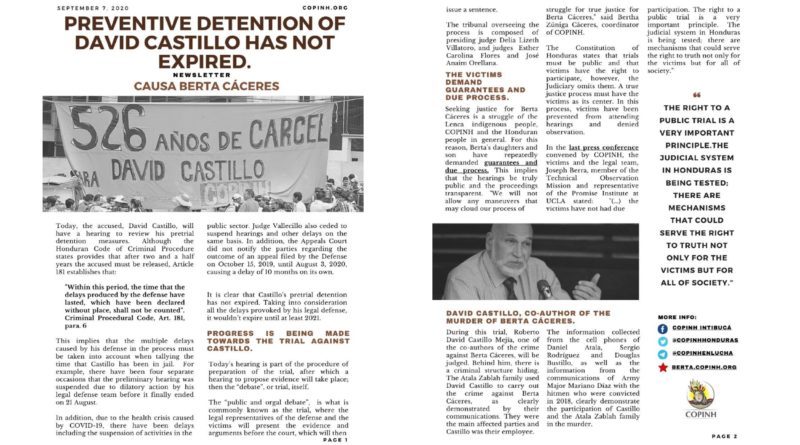 The pretrial detention of David Castillo has not run out

Today, the accused, David Castillo, will have a hearing to review his pretrial detention measures. fo Although the Honduran Code of Criminal Procedure states that after two and a half years the accused must be released, Article 181 establishes that:

“Within this period, the time that the delays produced by the defense have lasted, which have been declared without place, shall not be counted”. Criminal Procedural Code, Art. 181, para. 6

This implies that the multiple delays caused by his defense in the process must be taken into account when tallying the time that  Castillo has been  in jail. For example, there have been  four separate occasions that the preliminary hearing was suspended due to dilatory action by his legal defense team before it finally ended on 21 August.

In addition, due to the health crisis caused by COVID-19,  there have been r delays, including the suspension of activities in the public sector. Judge Vallecillo also ceded to suspend hearings and other delays on the same basis. In addition, the Appeals Court did not notify the parties regarding the outcome of an appeal filed by the Defense on October 15, 2019 until August 3, 2020, causing a delay of 10 months on its own.

It is clear that Castillo’s pretrial detention has not expired. Taking into consideration all the delays provoked by his legal defense,  it wouldn’t expire until at least July 2021.

Progress is being made towards the trial against Castillo

Today’s hearing is part of the procedure of preparation of the trial, after which a hearing to propose evidence will take place; then the “debate”, or trial, itself.

The “public and oral debate”, is what is commonly known as the trial, where the legal representatives of the defense and the victims will present the evidence and arguments before the  court, which will then  issue a sentence.

The victims demand guarantees and due process

Seeking justice for Berta Cáceres is a struggle of the Lenca indigenous people, COPINH and the Honduran people in general. For this reason, Berta’s daughters and son have repeatedly demanded guarantees and due process. This implies that the hearings be truly public and the proceedings transparent.

“We will not allow any maneuvers that may cloud our process of struggle for true justice for Berta Cáceres,” said Bertha Zúniga Cáceres, coordinator of COPINH.

The Constitution of Honduras states that trials must be  public  and that victims have the right to participate,  however, the Judiciary omits them. A true justice process must have the victims as its center. In this process, victims have been prevented from attending hearings and denied observation.

In the last press conference convened by COPINH, the victims and the legal team, Joseph Berra, member of the Technical Observation Mission and representative of the Promise Institute at UCLAstated:

“(…) the victims have not had due participation. The right to a public trial  is a very important principle. The judicial system in Honduras is being tested; there are mechanisms that could serve the right to truth not only for the victims but for all of society.”

David Castillo, co-author of the murder of Berta Cáceres.

The information collected from the cell phones of Daniel Atala, Sergio Rodríguez and Douglas Bustillo, as well as the information from the communications of Army Major Mariano Díaz with the hitmen who were convicted in 2018, clearly demonstrate the participation of Castillo and the Atala Zablah family in the murder.