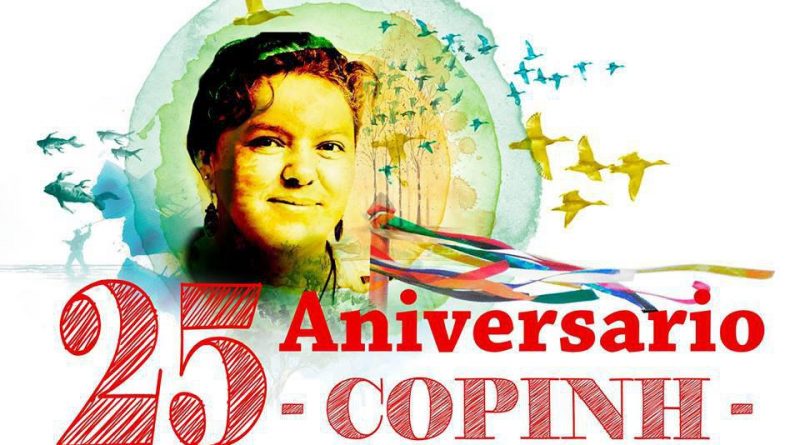 25 Years in Struggle for Life and Justice

25 years ago in La Esperanza, Intibucá, Honduras, the Civil Council of Grassroots Indigenous Organizations of Honduras (COPINH) was founded as an organization to defend the territorial rights of the Lenca people.

It was born in the midst of a bloody era at the beginning of the free trade agreements and the outright concession of territories, which gave rise to the beginning of struggles to reclaim Honduras and Latin America. In that moment of crisis and historic change COPINH made a seed of rebellion grow in indigenous towns and communities.

At present, our organization of many communities has traversed a tremendous path of learning and resistance in the face of systems of domination that sustain the plunder of our territories and the exploitation of their populations. These have been years of great repression, hard struggles, starting from zero, but without a doubt this has been one of the most important political and social struggles in Honduras. It has meant many victories and advances as peoples. COPINH today confronts many challenges and re-encounters with COPINH’s mission in order continue the struggle at this moment.

The work and thought of our sister Berta has clearly left its mark. She pushed this project of struggle strongly, defying the multiple oppressions that befall people, expressed today in voracious national and transnational corporations who enrich themselves with the thriving business of energy production based in the plunder of communities and who assassinated her for that struggle two years ago.

In commemoration of the 2nd anniversary of our sister Berta’s transition – which still remains in impunity even though the masterminds are known –  we reaffirm the demand of the Lenca people for truth, justice and deep structural changes for our people and for Honduras.

To demand justice for Berta, to breath life into this seed of freedom, and so that in our Honduras we can plant other seeds of freedom that flourish in the midst of profound oppression, we invite you to join us in La Esperanza, Intibucá from March 22nd-24th, 2018. We await you with joyful rebellion, music, street action and dialogue amongst those who want a future of life, justice and respect for the sovereign will of the people.

In this encoutner we will talk about the case of our sister and we will link the distinct efforts to forge a strong path of struggle for the re-foundation of Honduras. That is what will guarantee the sovereignty of the people to decide without imposition and corrupt authoritarianism in order to truly achieve justice.

Listen to our radios