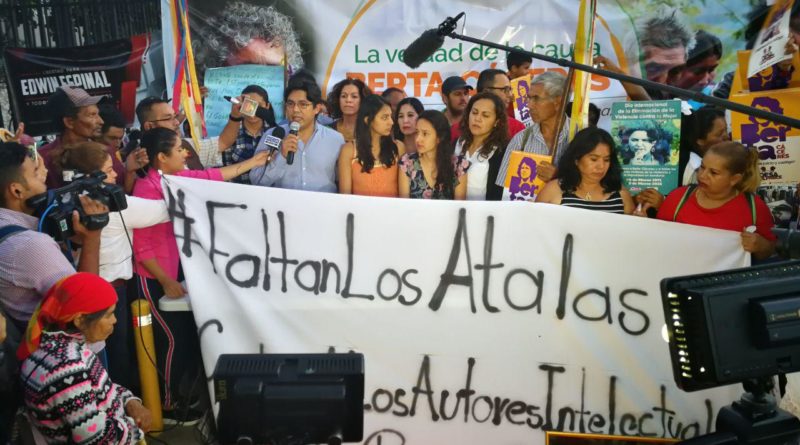 On Monday, November 23rd, the hearing to propose evidence to be used in the trial against David Castillo was scheduled, but was suspended due to another appeal filed by the defense. This is the eighth hearing that has been suspended in this case in the last three months. The appeal was declared inadmissible and the hearing is pending.

During this stage of the judiciary process, evidence that shows the link between David Castillo, the material and intellectual authors already convicted, the Atala Zablah family, and the responsibilities of the State of Honduras in this crime will be presented. The context surrounding the crime, the actions that triggered the events of March 2, 2016, will be made known.

Despite the multiple delaying maneuvers of David Castillo’s defense, the fight for justice for Berta does not stop. There will be a trial against David Castillo and his responsibilities and those of his accomplices will be made known.

There is clear evidence in this case, which cannot be dismissed. The justice system must act.

Representatives of different organizations of the Mission participated in the conference, referring to the urgency of justice in the cases surrounding the crime of Berta, to the arbitrary exclusion of COPINH as private accusation in the Fraud on the Gualcarque case, as well as the importance of the observation of these cases until there is investigation and trial of the intellectual authorship.

Participants emphasized the selective nature of justice in Honduras, which acts with agility to prosecute and criminalize human rights defenders as it has done in the case of the Guapinol River defenders, against inaction or unjustified delays in cases of corruption or crimes against humanity that sustain impunity in Honduras.

“The conviction two years ago did not mean a break in the structure of impunity. The Lenca community was damaged and harmed by this crime, the State has the obligation to recognize the rights of Indigenous Peoples,” said Joe Berra, a member of the Observation Mission.

On Wednesday, December 8, the Forum “Human Rights Violations in Honduras and the Role of the European Union” was held, co-organized by members of the European Parliament, the Eu-LAT Network and Friends of the Earth Europe, with the participation of Miriam Miranda, General Coordinator of OFRANEH, Berta Zúniga, General Coordinator of COPINH, Gabriela Sorto, water defender of the community of Guapinol and Dr. Juan Almendarez, to give their testimonies regarding the serious human rights violations committed against their communities in defense of their territories.

Throughout the presentations, participants denounced the inaction of the State of Honduras in the search of the Garifuna people who were forcibly disappeared from their homes by men dressed as National Police on July 18, 2020. At the same time, the current situation in the search for justice for the crime of Berta Cáceres, the delay of the process in the case against David Castillo and the lack of investigation and prosecution Atala Zablah family was highlighted.

Emphasis was placed on the role of European banks that finance extractive companies, including the Dutch Development Bank FMO, the Finnish bank Finn Fund and the Central American Bank for Economic Integration (CABEI), which allowed the illegal and unconsulted imposition of the Agua Zarca hydroelectric project, which ended many lives and led to systematic attacks against the community of Río Blanco.

The water of the people on Wall Street.

Water, a common and sacred good for the Peoples of the world, began to be traded this week on the Wall Street futures market. That is to say, a fundamental good for life on the planet is entering into financial market speculation, just like oil, wheat and other so-called raw materials that are already exchangeable goods for those who can buy and sell them at will.

While the banks that finance hydroelectric projects invest their capital and give free rein to energy producing companies, with the excuse of flood control after the passage of hurricanes ETA and IOTA, the communities that live on the banks of most of the basins in Honduras are affected by the great droughts or floods damaging their crops, their food source and their spiritual relationship with water.

In response, Pedro Arrojo, the UN Special Rapporteur for the Human Rights to Safe Drinking Water and Sanitation, noted in El País: “These exchanges of concessions enter into flagrant contradiction with the bases with which a public good is administered, more than making it more flexible, this is the free market that makes a business out of water, suddenly someone makes money by selling a right that the State has given for free.”

Mr. Arrojo previously participated in the international observation of the first trial for the material authorship of the crime of Berta Cáceres, and has, on several occasions, urged the government of Honduras to open the investigation to the intellectual authorship, the financiers of the murder for their struggle in defense of rivers and life.

“The Lenca people are the ancestral custodians of the rivers,” said Berta Cáceres in her speech upon receiving the Goldman Environmental Prize, because the defense of water and life in the territories was one of the greatest and most constant struggles she led together with COPINH, a struggle for which she was murdered.