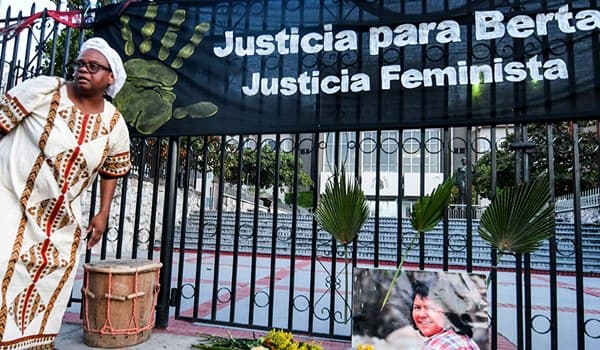 This Monday, November 23rd, the Hearing for Presentation of Evidence in the case against David Castillo was suspended again due to delaying actions by his defense. In this stage of proceedings, the evidence linking David Castillo to the crime would be presented, and the context around the crime and the actions and responsibilities that triggered the events of March 2, 2016 would be disclosed.

The maneuvers to delay proceedings with the purpose of avoiding justice are obvious: trying to ensure that hearings do not take place and that evidence is not revealed and requesting that there be no  public transmission of proceedings for observation by Honduran and international society. All these actions seek to hide the truth that the Honduran people and the world demand. These are puerile maneuvers that seek to hide not only David Castillo’s responsibility, but also that of the masterminds of the crime, the Atala Zablah, as well as the State of Honduras’ responsibility in the case.

👉🏾 Want to know the details of the hearing held? Here is a summary made by the Qualified Observation Mission.

Through its social networks, the Qualified Observation Mission will be communicating its future observations.

When will the discovery hearing against David Castillo continue? The hearing will be held once the Court of Appeals has ruled on the defense’s appeal. They have five working days to do this.

An Opportunity for Justice in Honduras:

The family of Berta Cáceres, COPINH, and the legal team for  the case for Justice for Berta, released a public statement at a press conference in which they explained their position regarding the beginning stage of the trial against David Castillo.

Doña Austra Berta Flores, mother of Berta Cáceres,stated: “that justice be done in this murder in which David Castillo undoubtedly participated, is really important. As a mother, I am counting on  all the national and international accompaniment, I know, that with the pressure from both, the masterminds  will be brought to trial and they will be punished with the strongest law, thus making them an example to the world so that those who defend the rivers, those who defend nature and the indigenous peoples, will not continue to be murdered.

More than two and a half years have passed since the capture of David Castillo and due to the continuous delays on the part of his defense, the trial against him has not been held. These desperate actions by his legal representation demonstrate a clear consciousness of their client’s guilt.

Laura Zúniga, daughter of Berta Cáceres, testified to the press: “David Castillo, one of the murderers of Berta Cáceres, a stalker who persecuted my mom, who harassed her on several occasions; he always tried to intimidate her by calling her and asking her how and where she was. This was a man following her and communicating with her who was trained at West Point, a military man, who sought to monitor and report the movements of the person who was going to be his victim.”

There is clear evidence in this case, which cannot be dismissed. Justice must act.

Justice for Berta is Feminist Justice!

In the framework of the International Day Against Violence Against Women, which reminds us of the Mirabal sisters who were  brutally murdered by the Dominican dictatorial regime in 1960, Berta’s struggle against a system with many oppressions becomes more meaningful in a context that is loaded with violence against those who choose to take care of life, confront death projects,and make decisions about their bodies and their territories.

Berta Cáceres was murdered for her work in COPINH, as an indigenous leader, for being a woman, for denouncing violence. Berta received constant death threats, sexual and telephone harassment, against her, her family and her organization while she denounced the illegal concessions approved after the coup d’etat. She faced criminalization and lived in permanent persecution. David Castillo’s intelligence work as an employee of the Atala family, led him to monitor Berta, to follow and persecute her for her opposition to the Agua Zarca Hydroelectric Project in order to neutralize her struggle and that of COPINH.

“The evidence that will be presented at the Presentation of Evidence Hearing will delve into the context of the crime, the various attempts on her life. This crime cannot be understood without the context, without knowing about the previous persecution, the hiring of hitmen. This was not because she was a certain person but because she was a woman and a leader of a resistance process for which she was murdered” declared Berta Zúniga, daughter of Berta Cáceres and General Coordinator of COPINH.