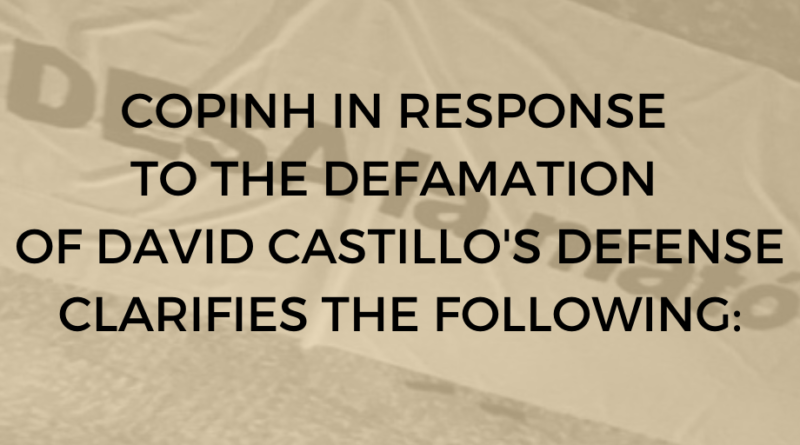 COPINH in response to the defamation of David Castillo’s Defense clarifies the following: (AQUI es Español)

1. At no moment have members of COPINH removed any judicial file related to the process being followed against Mr. David Castillo as part of the criminal structure that murdered Berta Cáceres.

2. The legal representation of the victims, in the exercise of the rights granted by Honduran law, managed copies of the judicial file since September 4 of this year, which were processed by the victims’ lawyer and the Secretary of the Court.

3. In that sense, the copies were managed before the new delaying maneuver of the judicial process that is being followed against Mr. David Castillo as an integral part of the criminal structure that murdered Berta Cáceres.

In response to these strategies, COPINH:

1. DEMAND FOR JUDICIAL POWER to guarantee, as established by Honduran legislation, maximum publicity for the trial being held against Mr. David Castillo as a member of the criminal structure that murdered comrade Berta Cáceres; and, to avoid any manipulation of information by the defense of those who are part of criminal structures that have mourned Honduran society and the international community.

2. REQUESTS HONDURAN SOCIETY to observe the trial that is being held against Mr. David Castillo, and to demand that the Honduran government dismantle the criminal structures that have caused so many deaths in the country, which have remained unpunished.

3. REQUESTS THE INTERNATIONAL COMMUNITY to accompany the demands of Honduran society for truth and justice; and, demand that the government of Honduras cease impunity and guarantee to all people a life free of violence.

Given in the city of La Esperanza on September 10th, 2020