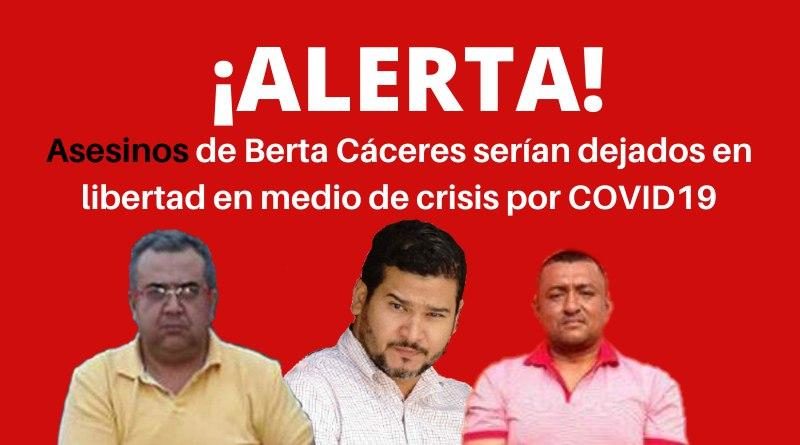 THE COVID-19 AS AN EXCUSE TO FREE MURDERERS

On April 7, COPINH denounced that workers of the Atala Zablah family, Sergio Rodríguez Orellana and Douglas Bustillo, sentenced to 30 years in prison for the murder of Berta Cáceres, could be released taking advantage of the crisis by the Covid-19. The same applies to the possible release of  David Castillo, the only intellectual author captured to date.

The selective release of human rights violators is another example of the corruption and impunity promoted by the Juan Orlando Hernández dictatorship. While the defenders of the rivers and the land are criminalized and prosecuted, as is the case of the comrades of Guapinol and as they did with Berta Cáceres, the State of Honduras and the National Penitentiary Institute (INP) clearly demonstrate the injustice in the privileges and protection enjoyed – as is the case of David Castillo – by aggressors, killers and those responsible for crimes such as Berta Cáceres’.

To date, the INP has not responded to the demands for information on the possible release and privileges of Berta Cáceres’ murderers.

Rep. Jim McGovern: “Honduras must not use the coronavirus as an excuse to free the men who murdered Berta Cáceres” U.S. Congressman

Erika Guevara Rosas: “COPINH denounces information about the possible release of two of those convicted of the murder of prominent human rights defender and leader Lenca #BertaCáceres” Director for Las Américas @AmnistíaOnline

TeleSur: Alert, two of Berta Caceres’ Killers may be released in Honduras

Four months after the end of David Castillo’s privileged pre-trial detention for his responsibility in the crime of Berta Cáceres, his defense has had no choice but to invent another smear campaign against COPINH, given the clarity of the evidence linking him to the crime. On October 10, the preliminary hearing against David Castillo was suspended for the third time due to the dilatory actions of his legal defense.

Currently, the Court of Appeals is awaiting the resolution of an appeal that was irregularly filed by the defense of David Castillo, more than 6 months ago, with which they seek to annul fundamental evidence on the involvement of the criminals.

This trial will publicly expose David Castillo’s involvement in coordinating the murder along with military Douglas Bustillo, as well as his role as liaison to the Atala Zablah family. The evidence is clear and involves sectors of economic, political and military power, which today, in the midst of this crisis, represent the decomposition of the Honduran state.

CABEI SELLS ITS STAKE TO DISASSOCIATE ITS RESPONSIBILITY IN THE CRIME OF BERTA CÁCERES.

COPINH on the diassociation of CABEI from the Agua Zarca project

The dissociation of the CABEI from this death project responds to the information that already exists about the responsibility of its partners, the Atala Zablah family, have as the intellectuals responsible for the murder of Berta Cáceres, and for which its employees were already condemned with a sentence that ratified the “consent of the board of directors of DESA” in the systematic attacks, persecution, violence and finally murder of Berta.

CABEI did not withdraw its funding, conscious of its responsibility in the death of 6 comrades in Rio Blanco and Berta. The solution chosen by CABEI is to sell the debt to a Swiss consortium, giving a way to reactivate the hydroelectric project.

In other words, the Gualcarque River, which Berta Cáceres defended, is still illegally licensed to investors. The communities of the “Freight Train to Honduras” project, which would invade the Garifuna communities in the northern coast and the communities in the southern area of Amapala Island, already criminalized and threatened with displacement, also continue to be threatened, and behind this the financial support of CABEI.

HERE DOWNLOAD OUR BOLETIN Justice for Berta is at riskDescarga