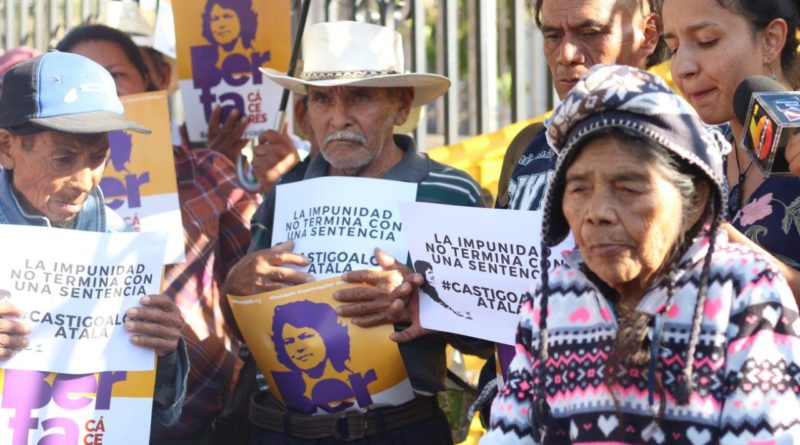 The struggle for justice for Berta continues.

(AQUI en ESPAÑOL) On December 2, 45 months after the crime and one year after the trial ended, the judiciary issued a judgment against seven material perpetrators for the murder of Berta Cáceres, indigenous leader and co-founder of COPINH and the attempt to murder against Gustavo Castro. Among those sentenced are workers of the company Desarrollos Energéticos S.A. and members of the Armed Forces of Honduras.

The Court, in the judgment, confirmed that Berta Cáceres’ leadership in defense of the Gualcarque River along with the resistance action of the Lenca people organized through COPINH “(…) caused the planning and mediation of the way to kill Mrs. Cáceres. all with the knowledge and consent of the executives of the DESA company, including Mr. Sergio Rodríguez and others who are not part of this process. ”

This reaffirms the denounce made since March 2, 2016, by Berta’s family and the COPINH: the murder of our companion Berta Cáceres was an action planned and organized by the executives of the company DESA, with the purpose of ending the resistance of the Lenca people and in complicity with the State of Honduras.

The prosecution and sentencing of the material authors is a necessary step and has been an achievement of the struggle of COPINH, the family, the Honduran people and the solidarity towards the breakdown of structural impunity. However, the Honduran State seeks to silence the pressures of the international community and public opinion.

Impunity in this crime will be overcome only when the intellectual authors are prosecuted and the root causes of violence in indigenous communities are eliminated.

The Observation Mission also pronounced: “The State of Honduras remains in debt for the murder of Berta Cáceres” official statement.

The media at the service of impunity.

The moment of the sentence has been positioned by the traditional press as a high point for the decadent Honduran justice system, the large corporations have echoed the statements, ignoring the complaint about the lack of prosecution of the top perpetrators.

The struggle for justice continues.

Berta, our sister will continue to be a symbol of struggle and hope for all the territories that today continue the battle in defense of life and that now are persecuted and criminalized by this dictatorship. This sentence is the beginning of an implacable path of justice for the people and for Honduras.

At COPINH we continue with hope defending the blood of the earth, building to coexist in a fair, dignified way, and for life. We do not falter in our struggle in which Berta lives.

To demand that progress be made in the investigation, prosecution and punishment of intellectual authors, sign this petition online.