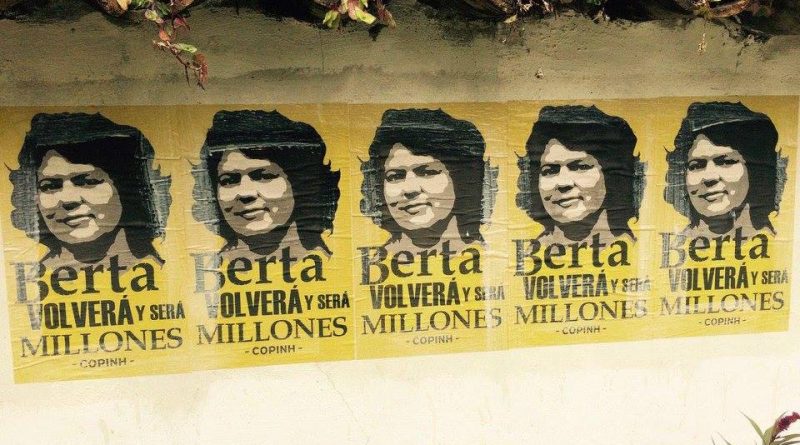 Anti-capitalist, anti-colonial, anti-racist and anti-patriarchal. These characteristics of COPINH aren’t an end in and of themselves – they are strategy, methodology and vision for struggle. We take the intersectional and internationalist path, with and by peoples who are oppressed, discriminated, excluded and attacked. We project the re-foundation of Honduras and strengthen ourselves together with the social movements in the region and the world. This way of thinking and acting is part of the inheritance that Berta Cáceres left behind and that we lift up on this sixth anniversary of her territorial femicide.

With the indigenous and Garífuna peoples, with the peasants, with the union movement, the teachers, the students, the environmentalists, the feminists, with the LGBTQ community, with the alternative and community media. With all of them, holistically, that is how Berta built a path to bring together other movements and organizations to re-found Honduras from below.

COPINH is steeped in the perspective on struggle that Berta carried forward every day and we want to honor her by re-vitalizing that capacity to unify in order to change this country.

We know what the role of the U.S. in Central America has been, especially in using Honduras as a platform for military deployment since the 90’s. That is why being anti-capitalist is one of the first ways that COPINH defines itself, inspired by the civilian struggles that emerged from Central America and enriched by the debates that we have had throughout Mesoamerica, in defense of cultural and biological diversity, in the struggle against militarization and in the struggles against the construction of dams, for example through the Latin American Network against Dams.

This goes hand-in-hand with being an anti-colonial and anti-racist organization that denounces colonial and racist actions against the Honduran people and calls out the internal racism and colonialism perpetuated by the structural invisibilization of the existence of indigenous peoples and our rights. It is evident that the marginalized social subjects of the West are the indigenous peoples, whose widely felt demand centers around land. Together with the Fraternal Black Organization of Honduras (Organiación Fraterna Negra de Honduras – OFRANEH) and since the days of the Confederation of Autochthonous Peoples of Honduras (Confederación de Pueblos Autóctonos de Honduras – CONPAH), COPINH has compelled a powerful process of unification amongst the organizations of Honduras’s indigenous peoples. Through mobilizations and pilgrimages to demand justice for the leaders who have been assassinated, or encampments to denounce numerous human rights violations, we have deepened the understanding that the plunder of ancestral lands and territories is not just an impact of the capitalist model, but also a racist attack perpetrated by the state. The National Front of Popular Resistance (Frente Nacional de Resistencia Popular) and the Platform of the Honduran Grassroots Social Movement (Plataforma del Movimiento Social y Popular de Honduras) have been spaces for unification for both reflection and insurrection in order to project the re-foundation of the country.

If we struggle for the emancipation of all peoples, undoubtedly our perspective must also be anti-patriarchal, in order to take down an active system of domination in which women and the LGBTQ community are considered at the end of the day to be objects of gender-based violence instead of subjects with rights. COPINH amplifies this feminist and anti-patriarchal perspective as we plan and further strengthen our process of unification with the grassroots feminisms of the country, throughout Latin America and the world. We have interesting and enriching debates to foment not only condemnation of machista and patriarchal violence, but also the need to promote the protagonism and political participation of peasant and indigenous women in social movements as well as their economic autonomy as part of the process of collective emancipation, unifying with women’s and LGBTQ formations.

These ways we define ourselves are key to our day-to-day actions, with the goal of taking down the system of multiple dominations.

Something that Berta also was able to do was bring external discussions to Honduras: denouncing militarization, defending biodiversity, exercising international solidarity with Cuba and Venezuela and even the Mapuche and Kurdish peoples. We, too, continue along that path.

How did Berta bring people together?

She was present. She did not how her solidarity with words as much as with actions. It meant showing up with her body, from one latitude to another. It meant staying.

She would listen. And with that listening we learn to give weight to the voices of the communities, of women, of the LGBTQ, of the ancestors, of the youth, of the children.

She respected the decisions of the communities. Even when she did not agree completely, she understood that the decisions were part of processes and the unique complexities of each space, movement or organization.

She did not take credit for the struggles of others. Despite her air of legitimacy, she never supplanted others in decisions or in serving as spokesperson.

She made visible the invisible social actors. At a symbolic level, but also concretely, the political spaces had to reflect the feeling of many sectors of Honduran society, as when choosing the head table to preside over the National Indigenous Constitutional Assembly. Pascualita was right there, the spiritual guide of the Lenca people, together with representatives of the LGBTQ community, the human rights and union movements, at the front of a debate being carried on by 1,500 representatives of the indigenous and black peoples of Honduras (Pech, Lenca, Chorti, Tolupan, Tawaka, Garífuna, Misquito y and English-speaking black peoples). They had come together in San Juan Durugübuti, Tela, to gather proposals for the re-foundation of Honduras, creating a concrete project of participatory democracy.

In sit-ins in front of embassies, in encampments in front of courthouses, in assemblies to re-found the country, in seminars and workshops, any space was good for “learning through action,” as Berta would affirm. Of course having spaces for ideological political formation is key, but COPINH also understands that we learn by doing: you learn at the blockade, when the radio lines are open, around the shared pot in the community, you learn from your mistakes. “In this collective, popular learning great ideas come about, proposals, contents, reflections and a lot of work… work that gets at the essence of those of us who want to transform this country,” said Berta regarding the Encounters for the Re-foundation of Honduras.

The new government of Xiomara Castro offers a much-needed chance to breathe for the social movement organizations to regain energy and come together again.

It is not the same context for unification that existed before the assassination of our sister Berta. Her absence undoubtedly has impacted the unity of the social movements, but it is a moment to come together again to project the realization of the Pluri-national, Indigenous, Grassroots, Anti-patriarchal Constitutional Assemble that, as we said as the end of January, should be the main objective of the government.

We understand that at this juncture there is a lack of leadership with the same capacity for unification and legitimacy earned and recognized by diverse sectors such as that possessed by Berta at the helm of COPINH. But there are efforts to come together and unify. And there are unquestionable leaders like our sister Miriam Miranda.

Today, still, our organizations are struggling for day-to-day survival in the face of the threats by transnational corporations, criminal groups such as drug traffickers and security forces who suffocate us, attack us and hold us hostage.

Today the criminal structures in the armed forces and in the justice system are still intact. We should organize and carry out a National Mobilization for a Constitutional Assembly made up of all the peoples of Honduras to eradicate the mafia that corrodes our country. We trust the analytical abilities of the communities to carry forward ethical processes of debate and mobilization.

COPINH’s platform is available to strengthen organizational social processes by the peoples, carried forth with the methodology for coming together that Berta used, which is to say: respecting the decisions of the communities; ensuring the independence of social organizations from any government; acting with solidarity by showing up, not just making declarations from a distance; carrying out holistic struggles; mobilizing against the concessionary model without losing our militancy; and carrying out a process to collectively build power from below.

As Berta said: “We have to continue struggling for the dignity of the Honduran people, so that someday we end this project of domination, of multiple oppressions that we suffer under.”

In recent years, COPINH has strengthened the participation of the youth in distinct spaces and little by little, we are developing new leadership. “Every day we want to contribute to making sure we don’t replicate in the youth the vices that organizations may have,” says Bertha Zúniga Cáceres, COPINH’s General Coordinator.

Almost 30 years after the creation of the Civil Council of Popular and Indigenous Organizations of Honduras (COPINH – Consejo Cívico de Organizaciones Populares e Indígenas de Honduras) we examine the footsteps that we have left along the path and have decided to deepen the legacy of Berta, of Pascualita and of so many fighters who shine the way. We will take steps to resist slavery, colonialism, racism, capitalism and patriarchy and re-affirm our commitment to support the indigenous peoples in defense of their territory, spirituality and our ways of seeing, living and feeling, to build a world that is just, free, equal and dignified.