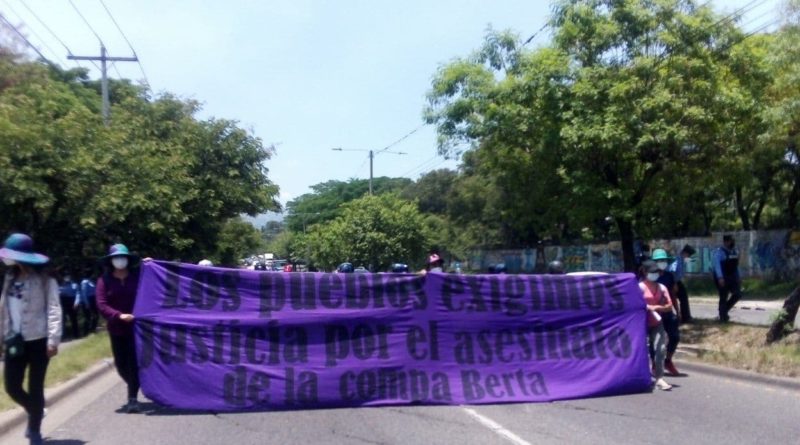 Victims and their allies of the deadly Honduran extractive model took to the streets of the country’s capital to demand an immediate halt to the energy, mining, tourism and forestry projects that private companies are implementing with the full support of the State through acts of violence and corruption, and without the free, prior and informed consent of the affected indigenous and rural communities.

The mass mobilization was called by the Council of Popular and Indigenous Organizations of Honduras (COPINH) and accompanied by territorial, feminist and student movements after 18 days of trial against David Castillo, accused of being co-author and part of the criminal structure behind the murder of Berta Cáceres, co-founder of COPINH and organizer of the indigenous and social movement who was murdered in her home on March 2, 2016 to stop her struggle against the imposition of the “Agua Zarca” hydroelectric project.

This project, owned by the Atala Zablah family, did not have the consent of the affected Lenca people, and was imposed in collusion with the armed forces and local mayors, which had been made evident during the trial of David Castilo. The Lenca leader, woman, defender of the Honduran territory, was nationally and internationally recognized for her work in claiming sovereign indigenous rights for the protection of land, water, forests, and for denouncing an extractive economic and political model based on dispossession that proliferated in Honduras after the coup d’état of 2009.

The Lenca Indigenous Council of Rio Blanco organized in COPINH, representing the victims of the Agua Zarca hydroelectric project, led the mobilization that culminated in the Supreme Court of Justice, where they presented their case to be recognized as legal victims and private prosecution in the case known as “Fraud in Gualcarque”, a parallel case to the murder trial, which exposes how the Agua Zarca hydroelectric project, backed by multi-million dollar investments from multilateral banks, received its licenses to operate through acts of corruption and reproducing patterns of violence on the affected communities.

The Lenca communities of Rio Blanco were victims of violence, threats, attacks, criminalization and saw their subsistence crops destroyed as part of the illegal implementation of the energy project. In addition, the hydroelectric company also negotiated a fraudulent power purchase agreement with the Honduran State to defraud Honduras of tens of millions of dollars. To date, the courts have rejected COPINH’s legal participation in the fraud case at the request of the defendants, including David Castillo, but it is impossible to deny that the Lenca people of Rio Blanco are victims of the Agua Zarco project and today’s legal action should lead to their immediate incorporation into the judicial process.

“For an economically and politically super-privileged family like the Atala Zablahs, it was impossible for an indigenous woman to question their macho, capitalist and racist logic. After a long smear campaign, surveillance, attacks and criminalization based on hate, racism and misogyny, the crime against Berta Cáceres was committed by a criminal structure because of the political and economic costs to the Atala Zablah family. We demand justice for Berta, the capture of the intellectual authors who are not being prosecuted and justice for Honduras with the cancellation of the projects that do not have the consent of the affected communities,” said Berta Zúniga, daughter of Berta Cáceres and current general coordinator of COPINH.

The courts must respond to the request of the Indigenous Council of Rio Blanco to be incorporated as a victim in the case “Fraud over the Gualcarque,” within three days, while the murder trial is expected to last until June. To date, the Honduran State has denied prosecuting the intellectual authors behind the murder of Berta Cáceres, despite overwhelming evidence pointing to the role of Atala Zablah family executives in the crime.